A tale of one overwhelming city

If you cannot (or do not want to) understand the depth and breadth of loneliness, then please do not watch Dhobi Ghat. You'll return disappointed, with nothing to show for your adventure except uncoagulating shards of poignant moments.
For the rest of you, here's what you can expect:
A wordless anthem of the greatest Indian city ever built. A city so powerful that it presses intimately, furiously, rudely against your chest, but leaves you alienated in the final reckoning. Mumbaikars know the city to be thus. Non-Mumbaikars have been told the city is thus by our film-makers and writers. Dhobi Ghat presumes that you already have this knowledge and underlines it for posterity.
The film revolves around four primary characters who connect and then diverge ephemerally. The screenplay reflects the random, frenetic pace of the landscape and the viewer is left to draw meanings as per his wont. Of course, each primary character is allowed to bring something immediate to the table, something that the city cannot wholly influence: personality.

1) Let's begin with Arun, played by Amir Khan. Arun's a painter of some repute. He's divorced and therefore distanced from his son; his grief - or other undisclosed things - have made him so self-absorbed that he's quite reluctant to face a nameless public even to sell his art. His life has become an unending quest to find the imagery for the next canvas. Thankfully, his kaleidoscopic city will never let the paint go dry inside the tubes. Arun, it seems, is reasonably well-to-do. And his art is meant for the elite whom he cannot respect.
2) Yasmin Noor (played by Kriti Malhotra) is a middle-class housewife who, upon getting married, has shifted from the Gangetic belt to Mumbai. She speaks to Arun, indirectly, through "video letters" she "writes" to her beloved brother. The oasis of purity she builds around her is no match for the filth of the city. And when she succumbs to the latter, she manages to add a dimension to the complex grief that Arun is already experiencing. Yet again, Arun is left rudderless and anchorless.
3) Shai is anything but! Played by Monica Dogra, she's a true-blue Indian American in the film and real life. She hooks up with Arun during an art exhibition, has a f**k-fest with him and is miffed when Arun terms it a ONS. On a sabbatical in sin city, she romances from behind the camera and, unwittingly, with a dhobi who reads sublimal messages in her provocative body language. She represents the elite that Arun caters to and despises. She will always be as liberated as she allows herself to be. Unfortunately, she's too attracted to Arun's tumultuous inner world to feel free. At least for the moment.
4) Finally, there's Prateik Babbar's character: Munna the dhobi. Munna has spent the greater part of his life in Mumbai but has somehow remained unsullied. Easy options are within his reach, but he would rather kill sewer rats than sell dope to the elite. In the daytime, he washes their clothes, then irons and delivers them, thus giving the film's writer a ready bridge between Shai and Arun. He also naively falls in love with Shai and, staying true to the decency that's intrinsic to his poverty, never crosses the line. He knows that his lot is meant to fail. Cheerfully.

These well-bordered characters interact with each other in a disjointed screenplay that becomes Dhobi Ghat. The verdict on Kiran Rao as a director will not come in until she makes another film. Because in this one, she's at times sublime and at others, trying too hard. But by Jove, one hopes that she retains Tushar Kanti Ray as her cinematographer because the story has been partially propped up by the camera. Certain frame compositions take one's breathe away. Despite shooting a city that's posed once too often, the camera manages to find freshness.
Amir acts well with his body and face, but his mild discomfort with the English language hinders his performance in a few scenes.
Kriti Malhotra is absolutely convincing. I still can't believe that she isn't really a Muslim woman from UP!
But the find of the film, almost like in a lost bilateral cricket series, is Prateik Babbar. This young man is on the button in every scene. If he plays his cards right, he could actually give Abhay Deol a run for his money. Because his cinematic sensibility could well rival that of the established offbeat-mainstream hero of modern times.
As for Monica Dogra, I so wished that she'd forget the camera and immerse herself in the moment. Like Kiran Rao, she must be given another chance because she's so frigging cute.

Overall, Dhobi Ghat is an experiment in literary cinema. Benegal didn't succeed with Trikaal, so there's no reason to be harsh on Rao. Just watch it for what it does to you. If nothing else, this film will teach you a little something about yourself.
Posted by Eshwar at 11:40 PM 7 comments: 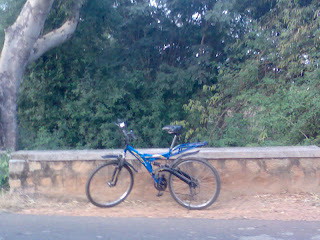 Bangalore has been deliciously sunny for the past couple of months. I start sweating before I pedal 10 kms on my bicycle which, I'm glad to report, has been restored to its former glory. The fact that I can reach a deep countryside within 7 minutes of leaving my apartment makes biking a joy. And I've realized that Ian McEwan makes more sense when I'm perched on the side rails of a culvert, with birdsong in my ears and a competent writer pummeling the area between them.


The other evening, during a discussion with a friend, I heard myself say that, in many ways, the true saint is the exact opposite of the writer. She asked me to explain myself and I gave it my best shot. Perhaps I'll be clearer with the written word.
The Human, it has been famously said, is a meaning-making machine. Seen in this context, the saintly amongst us are those who have made their peace with the universe. They've chosen their path - be it God, a higher consciousness, a grander Logic, whatever - and using this path, squeezed their meanings out. They're satisfied.
The writer, on the other hand, deliberately wanders through his favourite paths, often knowing that he or she is trapped in a maze. He might have accepted that he cannot contribute a new thought to the world. Perhaps every worthwhile thought was in place even before the first hydrogen atom was born. But he must still try and find newer perspectives to his pet ideas. His characters and stories must find newer answers to his persistent questions. To ensure all this, he must think and feel without reservations. Feel, especially. He must put himself out there. In his life and through his books. Every emotion must be felt in its fullness; and when the emotion turns cold, he might consider probing it for an insight.
Juxtaposed against the saint's life, one might say that the writer chooses to be "ignorant." His craft emerges out of this ignorance.
Just a thought. Don't hang me for it :)


Noted civil rights activist and leader of AP's PUCL K. G. Kannabiran died in late December. I had interviewed him in 2008 and he came across as regal and assured. Since his death arrives in the lingering wake of K. Balagopal's, one fears that a whole generation of Andhra's civil rights stalwarts is fading away. Is the second rung ready to occupy the intellectual/ideological positions vacated by their seniors? One hopes so. Because the Dandakaranya region requires bold, unwavering voices more than ever before - Dr Binayak Sen's incarceration being a case in point.


Am reading Imagining India by Nandan Nilekani. I confess that I wouldn't have picked up this book were it not required for a new assignment. But Nilekani has managed to engage me so far. I don't quite agree with many of his perspectives on the history of modern India, but I'm keen to know what he has to say about the future.


Finally, I end with a fragment of a poem written recently by my friend Mohan Ramamoorthy. Mail me if you'd like to read the whole thing.

In the hammock
Inert is my body
Restless is my mind
Furiously juggling
Random pieces
Of conversations, gestures
To figure out something
(about you... that, I suspect, concerns us)