“Perfectionism is self-abuse of the highest order” – Anne Wilson Schaef

Should the pursuit of perfection be attempted? Is it even desirable? Well, I'd rather pursue excellence. And I'll tell you why.

Perfection is three demons masquerading as one angel. Underneath the sublime radiance of perfection lurks the fear of inadequacy, fear of criticism and fear of rejection. Underneath excellence lies the far kinder fear of mediocrity.
There may be some perfectionists out there who are always in action mode. Heck, some of them might not even suffer from acidity, cardiovascular problems, migraine etc. But they are few in number. For the most part, perfectionists are either stuck in neutral gear or revving ahead in fifth gear. Because perfection is a destination. And unless the perfectionist can see it, have a map leading up to it and has clear blue skies to take him there, he isn't budging.
Perfection is like an airplane journey. It takes off from Point Zero and reaches Point Perfection with no stops in between. The trouble with airplane journeys is that it requires a smooth and long runway (bundles of energy), white petrol (inspiration) and ticket cost (the luxury of time so that inspiration can strike and clarity can emerge).

Excellence, on the other hand, is a land-hugging journey (not a destination). It's a bumpy ride, involves taking wrong turns and making an ass of oneself. Excellence is a series of incremental hops from Point Zero to Point Oh-Wow. Excellence constantly acknowledges its current position (which could be "pathetic", "mediocre", "getting there", "getting good" etc). In other words, it celebrates imperfections at all times. Excellence is not stopped by the current point, because it runs on the belief that things get better with effort.

So you want to kick the demon triplets (inadequacy, criticism, rejection) out of your lives, then I suggest that you drop perfectionism and embrace excellence. You may not be able to see the landscape of your idea from 10,000 feet above the ground, but your feet will be firmly planted on the ground and you will be able to put together the Big Picture soon enough.
So know that you are good enough. And start soon enough.

P.S: While this post serves anybody interested, I wrote it specifically for the writers participating in the second batch of my Write Now! program.
Posted by Eshwar at 11:11 PM 3 comments:

Write Now! - my workshop is back

Last year, my writing workshop titled Write Now! was extremely well-received, as is evident in this video testimonial. It was but natural for me to undertake this journey again, this time with new fellow travelers. 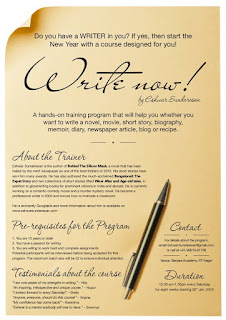 So if you are an aspiring writer, closet writer, doubtful writer, optimistic writer... in short, if you have a desire to write and are based in Bangalore, do check out my workshop.
I love writing and I love teaching and this workshop brings those twin loves together.

Posted by Eshwar at 3:02 PM No comments: