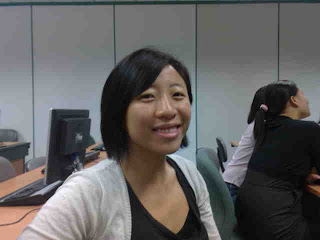 Tze wei poses for the mms exercise in the classroom.
Posted by Eshwar at 8:52 AM No comments:

So everybody who gives awards is in agreement that Slumdog Millionaire is an extremely good film. Heck, it's apparently a rare all-round package. Admirers might even call it a classic - the Indian film that was made when not many white people knew what Indian films were like.

But I belong to that contingent of Indians who can't see what the fuss is all about. I offer the following reasons:

1) The screenplay was brilliant in patches, but for the most part, it was unimaginative and even downright shoddy.

2) The casting - why should a spotless "white gujju", someone who looks like he's always lived an air-conditioned life, be cast to play a man who's had the harshest life imaginable? Travails do not smoothen your skin. Repulsive sensual assaults do not lead to a refined face. Have a look at the hero's elder brother. Now, that's great casting. And hey, please offer a better explanation for the accent. I've seen tourist guides in Agra and they don't magically develop Yorkshire accents. Sorry. They don't.

3) How could every successive question lead the hero down memory lane in a chronological order? Couldn't life have thrown him the answer to question 12 before the answer to question 5? Or did somebody decide that flipping back and forth in the narrative - interspersed as it was with the cop beatings - would be too difficult for the public to understand?

4) I'm not against anybody documenting the "truth" about India. It is a nation of paradoxes. It can shock. I've accepted this. But I have a problem with Slumdog Millionaire being termed fresh or path-breaking. Indeed, many Indian filmmakers have depicted urban squalor with far more poignancy and much lesser drama. Salaam Bombay came out ages ago. And films such as Ankush, Satya, Boot Polish, Do Bigha Zameen etc deal with certain aspects of poverty in urban India.

Congratulations, Danny Boyle. Enjoy the moment. But do watch Rang de basanti and Taare zameen par when you can. These films and their filmmakers will have to wait a decade more, at least, to win an Oscar. For now, they remain, well, slumdogs.

And so it goes

I know what you're thinking. Will I use this space for smoldering rhetoric and cathartic cool-offs? Not really. I couldn't really come up with an apt title in the five minutes I had. But the idea of combining the fate of an unpublished novel and a doomed planet (?) seemed appealing in the heat and sluice of the moment.

So what would I use this space for? I don't know. I don't come from a land of planned cities. Things evolve. So will this blog.
Posted by Eshwar at 9:52 AM 2 comments: