Don't be so open-minded that your brain falls out 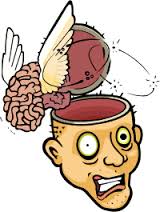 Yesterday, I got a message on a WhatsApp group I belong to. A person employed by a well-known corporate research firm made the tall claim that NASA itself had rejected global climate change. This comes at a time when Planet Earth has recorded its 11th hottest month in a row. So I messaged the group stating that the man's claims were too ridiculous to be taken seriously and also wondered about the veracity of the research being conducted by his employer.
Having just delivered a class on Being non-judgmental, I've been even more preoccupied with beliefs and the role they play in shaping our thinking and behaviour.
Ever since I became a counselor, I've been extra careful in respecting people's beliefs. That's important in counseling. Most of us seem to possess a subset of beliefs that is bizarre and/or unproven but deeply cherished. Rejecting such a belief is akin to rejecting the human being herself. So while counseling, I ask a golden question: is the belief helping the person or harming the person? If it is helping them, who am I to question it? If it is harming them, it is my job to ask them to reconsider their belief and then let them make an autonomous choice.
So when it comes to individual interactions, to each his own. One person's nectar is another person's poison. If you think that the universe is concerned about your well-being and that belief keeps you positive, by all means believe in it. I will not tell you that you are an inhabitant of a placid suburban planet of the Milky Way galaxy which itself seems to be in a far-flung quiet neighbourhood of the universe.

At the same time, I'm disturbed to witness bizarre, convenient beliefs take centrestage in discussions that affect humankind. Nowhere is this more evident than the issue of human-influenced global climate change. In the US, the Republican party has successfully created the impression that there are two sides to this story. They claim that scientists are divided on the issue (as per the NASA website, 97% of the scientists are in agreement and the findings of the 3% have been widely debunked). However, a great number of Americans believe that we must research more before we conclude that we are destroying the ecology of earth. Apparently, breathing toxic air and drinking filthy water is not proof enough.
In reality, this debate is between a fact and a belief. It is a fact that we need to find a more sustainable economic model. It is a belief that we don't. This unequal juxtaposition has been made possible by elevating the belief to the status of a fact and by pulling down the fact to the level of a belief.
If this were happening in Nicaragua or Moldova or some such small country, we needn't be so concerned. But since the US is the largest carbon emitter in the world, this discussion affects all of us. If the US doesn't lead us out of a fossil fuel-based economy, and soon, we might well get to the brink of extinction or beyond.

Meanwhile, many other beliefs continue to threaten our collective well-being. Believing that a herbal juice will miraculously cure cancer, that self-proclaimed gurus can offer a panacea for our problems, that vaccines cause autism, that homeopathy is a true science, that capitalism is the only viable economic system... the list is endless, really.
For a long time now, I have been way too respectful of beliefs that dilute the quality of debates happening in society. It's time for me to evolve. I don't have to treat your belief as equal to everybody's fact. Yes, facts belong to everybody. Even to those who don't agree with them. Gravity is a fact. You don't start floating off into space when you refuse to believe in gravity!
What's the difference between a fact and a belief, you ask? Facts need to be established. Beliefs only need to be articulated.

I remain a willing learner. I am not shy of stating, "I don't know," when confronted with a deep question. I will continue to embrace the mysteries of life and the universe. I will forever strive to seek broader understandings of reality.
But, to paraphrase a famous quote: if I am any more open-minded than that, my brain will fall out!
Posted by Eshwar at 5:51 PM 4 comments: