Shall we invade now? 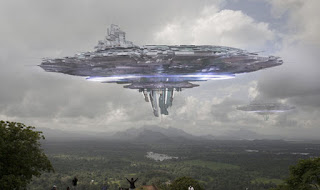 Sitting in front of his thought-driven console, Captain Zeen was getting impatient.
"Where's Arrgh? I must know the truth about these life forms in this suburban blue-green planet. Ah, there you are."
"Hail Captain!" said Arrgh. "My report is ready. I apologize it took so long. But these life forms are indecipherable."
"That's an understatement, isn't it? Look at them. They have millions of vessels that can fly, yet so few of them are up in the air. They have a billion vessels that crawl fast, and most of these are kept stationary next to their homes. They have pathways that can take them from one end of the continent to another, but the life forms stay indoors, as if they don't care. I am reminded of our ancient Emperor who created a kingdom of gold, but spent his lifetime on the balcony of the palace, wondering about the sun and the moon. Our folklore tells us that the Emperor was a fool. Can the same be said about these life forms?"
"I cannot say for sure," replied Arrgh.
"You are my expert analyst of alien civilizations," snapped Zeen. "Say something useful."
"I don't know if you consider this useful, Captain, but I have three possible explanations for what we see."
"Let's hear them."
"The first explanation is that these life forms believe in the supremacy of inner exploration. They perceive that to be more important than exploring their world. They reached a threshold point in their civilization where they realized that no amount of success and wealth can make them happy. So they have created a culture of finding happiness within themselves. They venture out only to carry food back to their homes. They probably consume very little."
"I remember conquering one such civilization in the seventh galaxy from home," said Zeen. "But they were spartan life forms. The surface of that planet showed no signs of ambition. These life forms, on the other hand... our scanners detected high-grade chemical weapons. Why are they armed to the teeth if they are all about inner exploration?"
"That is a great question. I confess to not knowing the answer. Would you like to hear the second possible explanation?"
"Only if it is better than the first."
"Well, our scanners show that these life forms harvested, manufactured and burnt chemicals in stella-tons till very recently. They polluted their water bodies, made their air toxic and bathed the food they ate with chemicals. They seem to have organized themselves into nations of varying sizes and when one nation didn't like another, they hurled chemicals at each other. At some recent point in their civilization, they must have realized that they were doing nothing more than killing each other while killing themselves. So they decided to mend their ways and honour their water, their air and their earth."
"This is even more of a ridiculous idea than the first," said Zeen. "Didn't we conquer a poisoned planet one stella-year ago? Was it in the ninth or tenth galaxy we visited? Ninth, I think. Those life forms knew that they were poisoning their precious water, air and earth. Did they stop? NO. When the water could no longer be drunk, they drank blood straight from each other's freshly-cleaved chests. After a point, life forms opt to become savages, not saints. Water, air and earth get poisoned in a thousand stella-years. Life forms except for us cannot think beyond a couple of stella-years. That's why we have been such successful conquerors."
"I agree," said Arrgh. "The third explanation is the most possible. Sometime in the recent past, these life forms faced a new enemy. An enemy that even our scanners cannot detect. So they were forced to abandon their glorious vessels and their glorious paths and take sanctuary in their own homes. This enemy has united them. Look, this small peninsula here is called North Korea. It seems to be the land of megalomaniacs. But the behaviour of life forms here is no different from the behaviour of life forms in this other nation here... Denmark. Something drastic must have happened for this warring planet to become so homogeneous and resort to a life of quiet reflection and severe caution."
"You make sense finally, Arrgh. If what you say is true, our visit is well-timed. We can stamp our authority on them when they are weak. They will surrender to our will in no time."
"I wouldn't be so sure, Captain Zeen. If what I say is true, then these life forms must have been disorganized from the beginning of time. And now they are united in the way they live and the way they acknowledge their interconnectedness with each other. They are weakened, but they are not weak. Let me remind you of the high-grade chemical weapons. Unlike in other planets, we will have to fight all of them together in order to win. Do you fancy our chances?"
Captain Zeen fell into deep thought, clicking his three forefingers together in enviable synchronicity. Finally, he said:
"Do you think they will stay united? Should we wait?"
Posted by Eshwar at 12:33 AM