7 great blessings of the pandemic 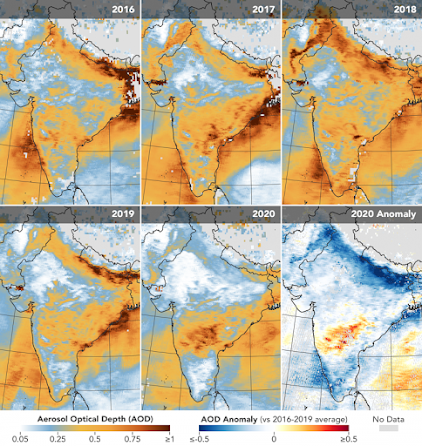 It is with reservations that I bring together the words "pandemic" and "blessings" in the title of this piece. I am aware of the great toll it has taken on the most disenfranchised people around the world. It has also claimed many, many lives and robbed us of time. Clearly, if one is to even begin seeing a blessing in the pandemic, one must necessarily look at future impacts of today's events. That's what I will do in this piece.
Let me also clarify that this is not an ode to gratitude. It will not ask you to stop feeling one way and start feeling another way. It would not remind you that happiness comes from within. Instead, it will attempt to collate facts and extrapolate them with objectivity.
Out there, in real space and real time, the world has improved in some ways. Let's see how.


1. The world is literally greener

The Himalayas are now visible from the plains of Uttar Pradesh! As early as April, reports began coming in that Indian rivers are becoming much cleaner, although the situation is not as optimistic as indicated in early reports.I myself witnessed sparrows returning to my neighbourhood in Ulsoor, which is at the heart of Bangalore.
As our industries and vehicles fume less, we are beginning to breathe easy. Last winter, Delhi was barely more habitable than Mars, but during the lockdown, the city's air quality increased by a whopping 79%. And according to a NASA finding (as shown in the image above), the air quality of the entire country stands at a 20-year high.
It is one thing to talk about how we could all strive to create a greener and cleaner world. It is another thing altogether to see this happening in front of us. Surely this is inspiring us to rethink the way we live? Surely we are beginning to see that, without a great deal of sacrifice and effort, we can live in a manner that benefits us as well as our ecosystems?


2. Moving from nation to species

European colonization eventually led to a rise in nationalism all around the world. As indigenous peoples fought for their freedom, they developed distinct nationalistic identities. Nationalism also got promoted by other global events including the two World Wars, countless internecine regional conflicts, and a Cold War that lasted for decades. Over time, we became rather adept at separating ourselves into nation-states. That's why we didn't have a clue about what to do next when faced with a conflict that affected us as a species. Even with its limited mandate, the UN attempted to bring all nations together to discuss the challenge posed by global climate change. The discussion quickly turned into debates that were hijacked and derailed by powerful nations. At one point, the debate was nothing more than a shrill exchange of angst between the developed and developing nations.
Even when we seemed to make progress (like with the Kyoto Protocol), it took an interminable amount of time for us to take the next step - the Paris Accord. And that small gain was summarily dismissed by Trump - a nationalist who, additionally, denies climate change.
Meanwhile, the other powerful idea that promised to bring us together - globalization - merely displaced jobs and prosperity while also increasing the gap between the haves and have-nots. Global trade, as it turned out, made companies richer and nations poorer. It was perhaps inevitable that globalization would eventually lead to an increase in nationalism.
Barring climate change, there seemed to be no issue that could potentially bring us together. And then came the pandemic. A challenge that, like climate change, affected us all. But unlike climate change, materialistic people could deny neither its presence nor its urgency. The pandemic is ideally suited to show us the limitations of the nation-state model of civilization. Viruses and rising oceans have one thing in common - they don't stay confined within borders. They don't care about your flag and anthem.
We are currently not seeing the pandemic create solidarity in the world because nationalists are still holding fort in major power centres. But when they are relegated to the dustbin of history, a new generation of leaders will operate with awareness that we are on this planet together. We will sink or swim together.
Perhaps an era of greater cooperation is just around the corner.

Ever since scientists raised their bugles to announce global climate change many decades ago, market fundamentalists have tried to negate the message."What are we supposed to do?" they ask. "Stop consumption, turn the clock, live like peasants? Do you know what will happen to the global economy if all of us limited our lifestyles? Can you imagine the loss of employment and the erosion of the economy?"
Well, in the past many months, hundreds of millions of jobs have been lost. Consumption has been force-cut. People have, willingly or unwillingly, cut back.
We make less, have less, do less. And contrary to predictions, we haven't perished. The idea that what is good for nature will be disastrous for civilization can now be challenged. Granted, we have to find solutions to big problems like employment, healthcare etc. But we can approach those problems while resorting to sustainability. We don't have to choose between Nature and Civilization. We can choose both.
Once the pandemic ends, the markets will take over again and a majority of people, starved of entertainment and freedom, will return to a life of excess. But it is comforting to know that, 15 years from now, when global climate change will become enormously undeniable, we have the ability to hit the brakes and bring down consumption overnight, if that's what it takes. It has been done and it can be done again.

4. A boost to sustainable living

A great majority of us are waiting for the pandemic to end so that we can re-enter a life of excess. Even in this majority, many will reconsider their consumption patterns. They might travel less frequently, make do with fewer material possessions... the extravagant might choose to make do with mere luxury, the luxurious might settle for comfort and so on... One hopes.At the same time, a minority will want to continue living a simple life of few pleasures and many connections.
The overall reduction in consumption might give our species a little more time before we reach the point of irreversible climate change.

"They have been fed everything on a golden spoon. The spoon was there, at the right place, when they needed it. They don't feel grateful and they can't delay the pleasures for which they will remain ungrateful."
Millennials have had to endure this unflattering generalization made by older generations. It is not their fault that they were born in an era of enormous social change and technological overhaul. They never had to wait a week to watch the next episode of their favourite television programs. How, pray, did we expect them to embody the stoicism of older generations?
But now, once the pandemic claimed their innumerable outdoor pleasures (leaving them with the solace of only online streaming platforms), millennials are showing us that they are not as fragile as we accused them of being. Many of them have led lonely lives, with few meaningful connections in the real world. But these connections are being fully harnessed and there is a greater acceptance of our shared evolving reality. I have seen this as a counselor and I have heard from my colleagues and friends how they have been pleasantly surprised by millennials.
We rely on millennials to solve our most pressing problems. They have less of the scarcity mindset and they are less obsessed with thoughts of their own families. They actually want to think in broader terms - about community, society, the world... therefore, their resilience is crucial.

Relationship expert Esther Perel, known for her insightful TED talks, has noticed that the pandemic has created an excess of (or the complete absence of) alone time. These extremes are compounded by thoughts of mortality. All relationships are, therefore, fast-tracked to where they would be a few years down the line. We are witnessing more pregnancies, breakups, separations and divorces.
Those in relationships with strong foundations are using the situation to empathise, adapt and come closer. Those in relationships that never got a solid footing are being splintered in quick time.
Perel reminds us that we, citizens of the modern world, expect meaning, belonging and community from our most important relationships. Those who find these precious elements in relationships are able to stay grounded and optimistic.
Her talk with Trevor Noah helps get a gist of what is happening around the world. As a counselor sitting in a small cove in Bangalore, I have myself counseled 7 couples in the past two months. And I endorse Perel's assessment that all relationships are being accelerated to their futures.

Dusty violin cases have been removed from attics. The forgotten Kindle has returned to the bedside table. Flabby tummies are bouncing in waves in badminton courts and lakeside trails. The mid-morning twitter of birds is now enriched by middle-aged vocal chords finding a new lease of life. Yoga videos on YouTube are now as popular as Taylor Swift's new album.
Those of us who are not spiraling into debt or depression are finding new lungs for old passions. We have always complained of not having enough time or energy to cultivate ourselves. Now, all we have to do is convert our commute time to self-development time (that's 3 hours for the average Bangalorean). On cue, the training industry is offering workshops and programs at huge discounted prices.
There has also been a drop in the number of smokers. Smoking, like any addiction, retains its patrons due to the fact that its perils are in the unforeseeable future while its pleasures are right here, right now. But people forced to face their mortality in Covid times are more likely to pay attention to the perils. This is what the Smoker and the Gun thought experiment says.
Keep a gun on a smoker's temple and tell him that he will be shot if he takes another puff. If he is convinced that the bullet will be fired, the smoker will not dare take that puff. The pandemic has become the virtual gun on the temple.
Hopefully, those who have kicked this (and other) addictions will not revert to them.

50 years from now, those of us who will be alive will look at the pandemic as one of the greatest challenges in their lives. Will they also see it as the moment in history where humankind took a U-turn to live a saner, more holistic and sustainable life?